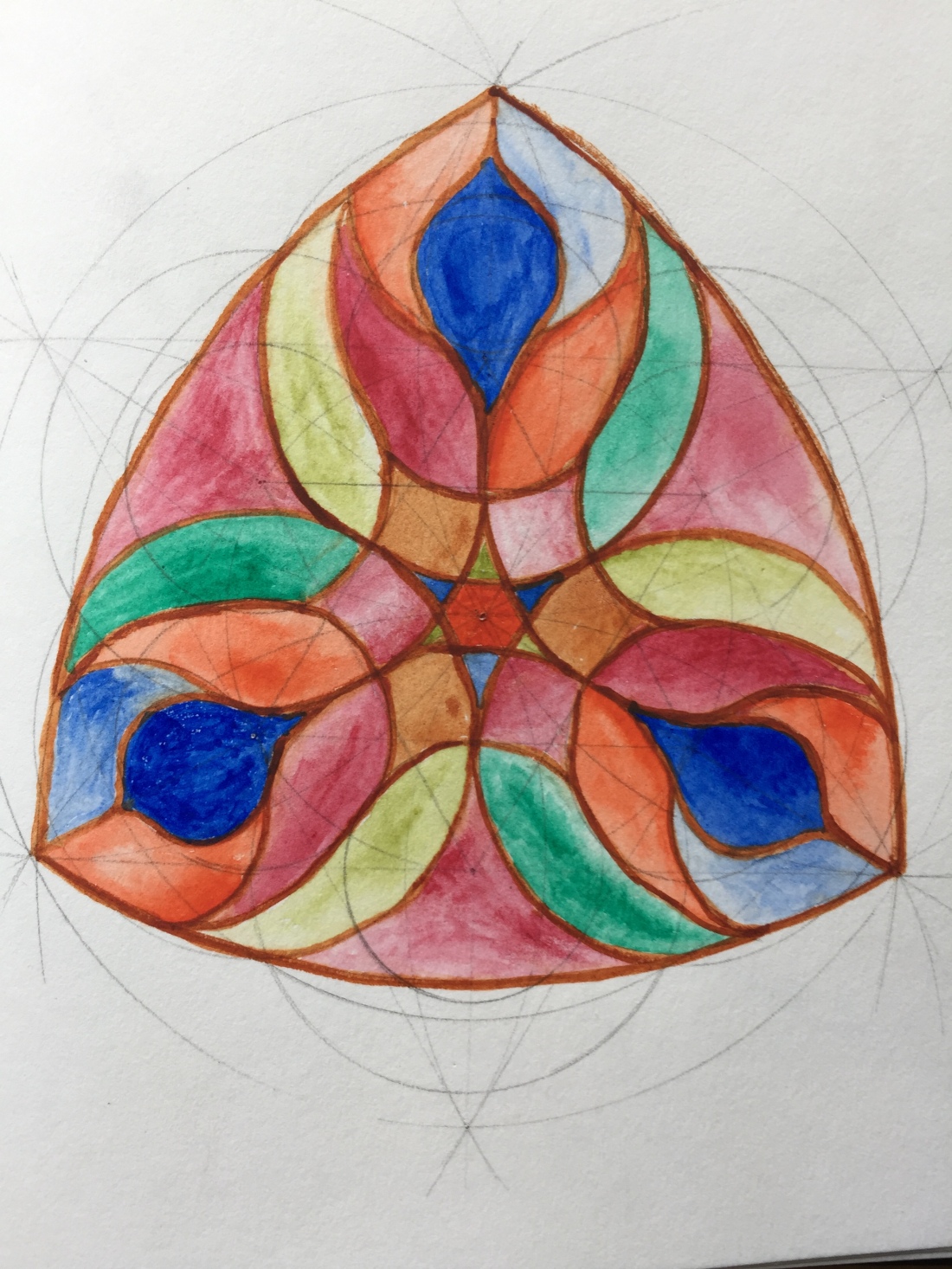 My pilgrimage has taken me into books. I am lucky enough to use  Lucy Cavendish College Library and was introduced to the Erasmus Room in the basement. This contains a legacy from Dr Peter Newman Brooks, former lecturer in Divinity. The walls are completely covered with books on Christianity and the Reformation, with a large red leather chair in which to read them. But where to start! I tried to stay focussed on pilgrims, pilgrimage, and Bury St Edmunds in particular, but it was easy to be distracted.

Most of the books focussed on the Church rather than the pilgrims in medieval England, however I found a book by Eamon Duffy: The Stripping of the Altars, which described in some detail the laity’s relationship to saints and pilgrimage, and is well-referenced.

Duffy states the main purpose of pilgrimage was to seek the holy, as embodied in a sacred place, relic, or privileged image (such as a statue). This, however, ignores the journey itself, which is also influential. The fact that the holy place is away from your own locality is relevant to the change of thinking which occurs from “stepping out” of normal circumstances. This has been described as a “liminal space” of transition and transformation. The pilgrim leaves behind his or her  routine world to enter a “sacred space”.

Duffy suggests an element of hardship was valued as giving  profane men and women insight into monastic life with renunciation, discipline and penitence. Pilgrimage may have been done as a penance:

And namely such as pains to take

On fote to punyshe thy frayle body-

The symbolic nature of a journey as a consecration of a whole life’s journey towards the sacred was recognised, as referred to by John Lydgate in 1426. Thus both the journey and the arrival are important as metaphor.

Seeking pardon and gaining “indulgences” for oneself and also through bequests for surrogate pilgrims were sited in wills. Bequests were designed to gain merit by paying for “diverse pilgrimages to holly seyntes” or paying by deputy indulgences. Margery Kempe from Kings Lynn describes her attendance at the Porticuncula Indulgence at Assisi  in 1414 for herself and  for her friends and enemies and all the souls in Purgatory. For this Margery was given money by neighbours and strangers. Thus a belief in the Afterlife, including Purgatory, was a necessary part of practise.

Seeking healing from holy sites, relics and icons was a common motive, with transfers of allegiance depending on the success of the miracles which occurred there. Pilgrim numbers can be estimated from pilgrim badges. Sites became competitive, with scope for fraud and abuse.

But what of Bury St Edmunds? The librarian wanted to lock the library, and I will need to return. 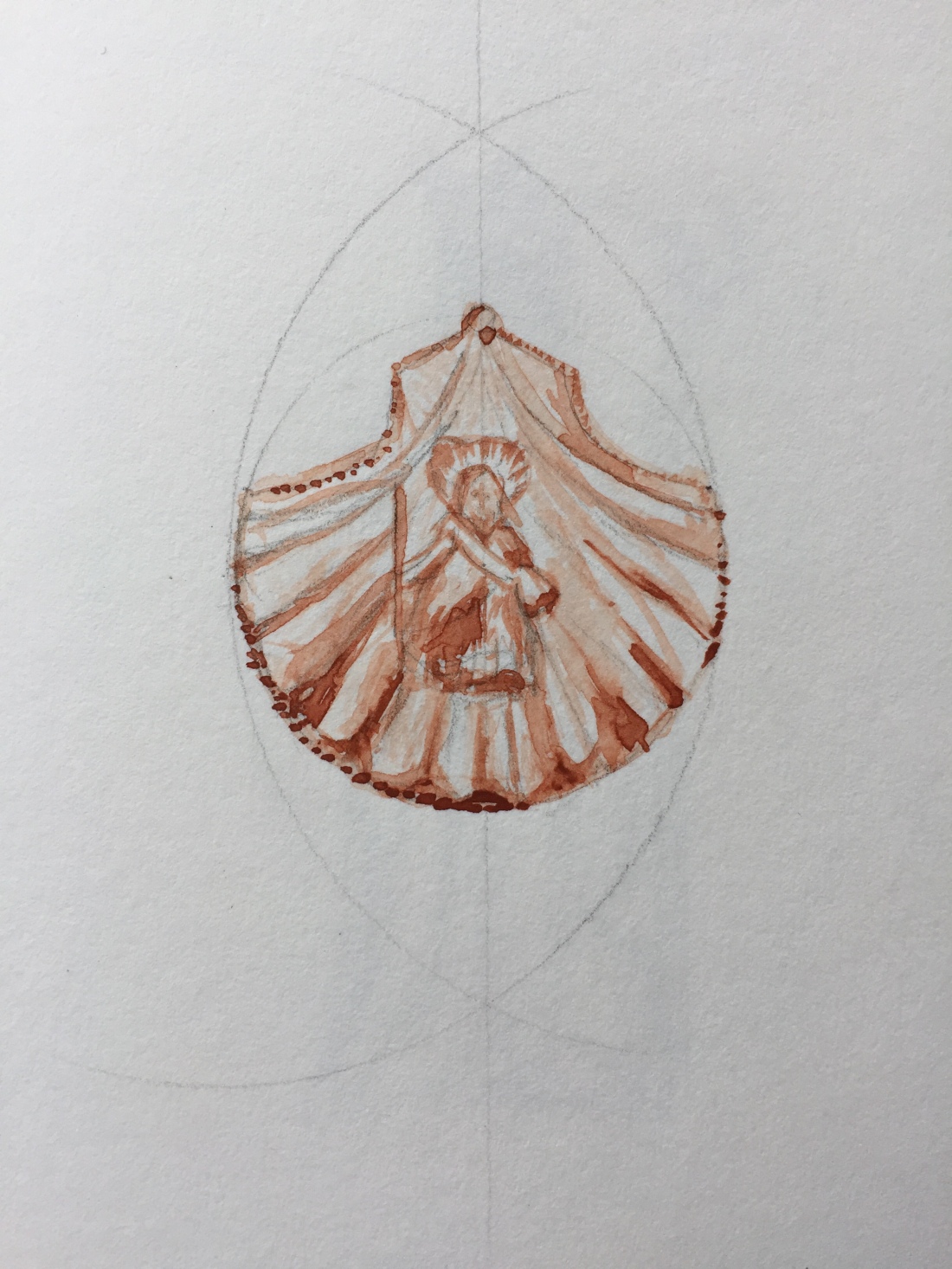 Last November I was able to spend a week in an Art Retreat in Northern Spain. The house was in a small village West of Astorga, on the Camino Frances to Santiago del Compostela. I was given wonderful hospitality by the owners, Basia and Bertrand, and had the opportunity to try out some principles of geometric art and also visit the many amazing ecclesiastical treasures in Astorga. Creating even the simplest images with a compass and rule was very absorbing, and gave me back my enthusiasm for painting. I also loved rambling around the countryside amongst the rocks and Spanish oaks

Returning to Bury St Edmunds I was left wondering about our past and how the abbey might have been. If it was anywhere near the more humble Astorga, let alone Santiago itself, then we have lost a lot of material wealth.

I visited Moyse Hall museum to see what they had- there is a collection of pilgrim badges, including ampullae- small vessels for holy water, a scallop shell and a camel, found at Dunwich and possibly lost by a pilgrim who had visited Jerusalem. I was excited by a small acorn ornament, which was probably attached to the end of a cord like a tassel- the acorn was smaller than an English one and exactly the same as the much smaller Spanish acorns I had collected on my walks! Could it be the owner had been familiar with Northern Spain?

So what happened to the ecclesiastical treasure? We all dream of buried gold, but it is more likely it was sold abroad by The Crown, or melted down. I asked the retired bursar of Trinity College Cambridge, Jeremy Fairbrother what was in their college attics: “Students”, he replied.

Mid-January I decided to walk North from Bury St Edmunds. I had just read “The St Edmund’s Way: a Pilgrim’s Notebook” published last year by Marcus Powles (ISBN-10 1973826755). The soil is drier in that direction at this time of the year, but not by much.

I was surprised to see snowdrops in a wood just before Culford- several weeks earlier than Bury.

As I approached The church of St Mary in Culford I met the church warden Marcus King. He was busy taking measurements in the churchyard. I had wanted to see the Commonwealth War-grave Commission grave that is registered, and he was happy to show me. The memorial is rather green compared to the bone-white rows I have seen in Northern France, and remembers Lance Corporal V.Haywood of the Royal Berkshire Regiment, who died on the 16th August 1942. Marcus explained there are, in fact, two graves : The second is a family grave, including Cecil Hinsby Clarke, who fell in Action In France and died aged 24y

The CWGC was recently put up a sign on the gate, but so far the second grave has not been acknowledged. The CGCG commission website record his name is on the Menin Gate Memorial 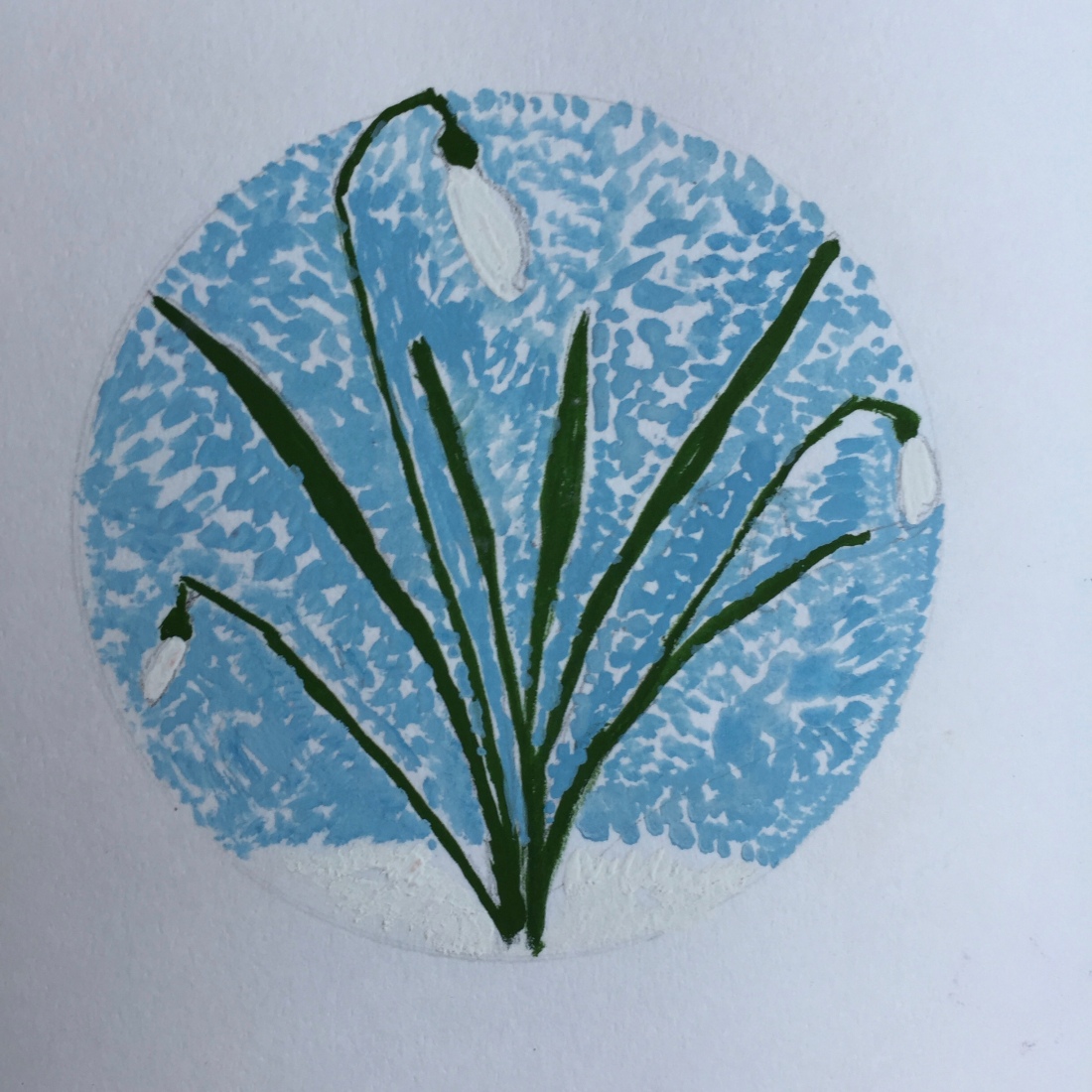 I took the St Edmund Way footpath to Lavenham, looking out for signs of Spring. At Nowton church there were lambs, and a single hare raced across a field by Skipper’s farm, but progress is slow due to the cold wind and recent snow. There was still snow lying in ditches, although the earth was drier and less muddy.

The “St Edmund Way” is a Long Distance footpath St Edmund Way.       One might imagine this to be an ancient way for pilgrims to travel to Bury, but in truth this seems unlikely. The path takes a rather zig-zag way to Lavenham crossing fields to avoid the A134 and A1141- surely these would have been the more obvious routes for pilgrims, stopping at The Rushbrooke arms (formally The Waggon) or The Horseshoes Inn at Cockfield (formally Horseshoes, or Three Horseshoes). Sadly the motor car has taken any pleasure out of these roads now for walkers.

There were two moments along the walk when I had a sense of the ancient: firstly there was a short track called Mill Lane leading to Little Rockwood Farm. This climbed a small hill between two high hedges, giving a strong sense of perspective as you walked. The ground was covered in tiny heart-shaped green leaves- celandines which should burst into yellow in a few weeks. Secondly, the tower of St Peter and St Paul’s church stuck out of the fields for miles before I actually got there. If this building was trying to make a statement about the wealth of the town it certainly succeeded. Its grandeur was all the more wonderful knowing I was getting close to my journey’s end, and a bus-ride back to Bury.  It can be no coincidence that the distance between the towns in East Anglia is a comfortable day’s walk.  Long Melford would have been next along the route, then Sudbury, but these will have to wait a while 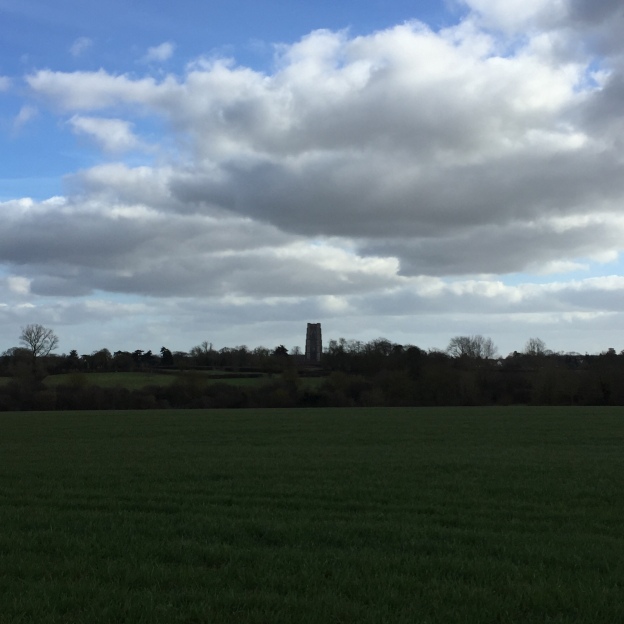 I walked to Nowton Church from Bury St Edmunds. It was a gloomy February afternoon: cold, damp and grey. I collected the key from Mrs Flynn, the warden living in the Almshouses. She explained the windows contained panels purchased by Orbell Ray Oakes around 1820 from a monastery in Brussels.

The church is reached from the west side by walking across three fields. It is very prettily situated towards the top of a hill. Inside was cold and dark, but the quality of the windows was remarkable: the old panels had been set with very brightly coloured Victorian glass, which glowed in the wintry light. The hybrid of the two styles created a rich tapestry effect, like a quilt. The images danced in their setting, the curves of the panels extended in rich red and purple.

Outside again, and the light was fading. I walked across the fields to return the key, and noticed more snowdrops by a bramble hedge. In the wood below the starlings were gathering. As I walked down the lane a small group of them were startled and with an enormous noise they took off, followed by thousands more. A murmuration swooped up and over the ploughed field beside us, and round, then over the horizon. .

That night I dreamt of of brambles, snowdrops and birds in branches, and knew these things were still alive in mid-winter

Information about Nowton church may be found here: https://historicengland.org.uk/listing/the-list/list-entry/1194745

This is a personal diary of one pilgrim. I live in Bury St Edmunds in Suffolk- a former pilgrimage centre based around the sacred shrine of St Edmunds.  The Reformation suppressed pilgrimage but the locality is surrounded by ghosts of a former age. Walking provides clues to this evidence- old pathways, reasonable walking distances, medieval churches, old names.

Most pilgrims were illiterate and much evidence must be heresy or guesswork. I am intrigued by other ways of knowing, particularly from visual art.

The intention of this blog is to build up a diary of personal experience and learn more about pilgrimage as a metaphor for a journey in life, as well as a way of getting to know the locality and its rich history. The act of writing for me will, I hope, draw out some ideas

Thus, I set pen to paper with delight, And quickly had my thoughts in Black and white.  John Bunyan The Pilgrim’s Progress 1678 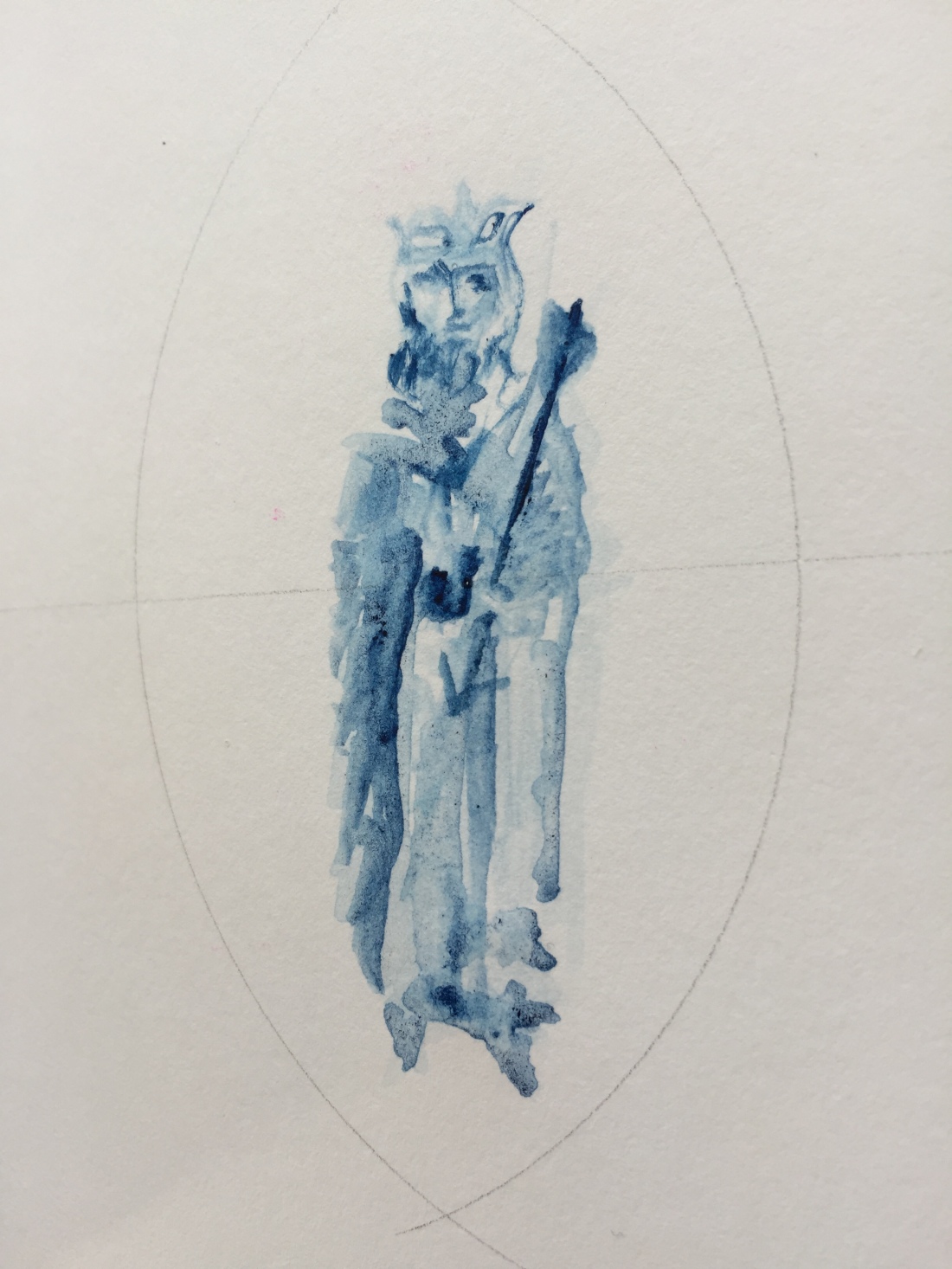