At last, after a year of trialing routes and many deliberations, the pilgrimages planned for the Millenium of the Foundation of the Abbey of St Edmund are available to book on the Cathedral website.  Hurrah! I have been slow in describing the routes on this blog, but will do so now in the hope that people will want to come. You will NOT be disappointed if you do. 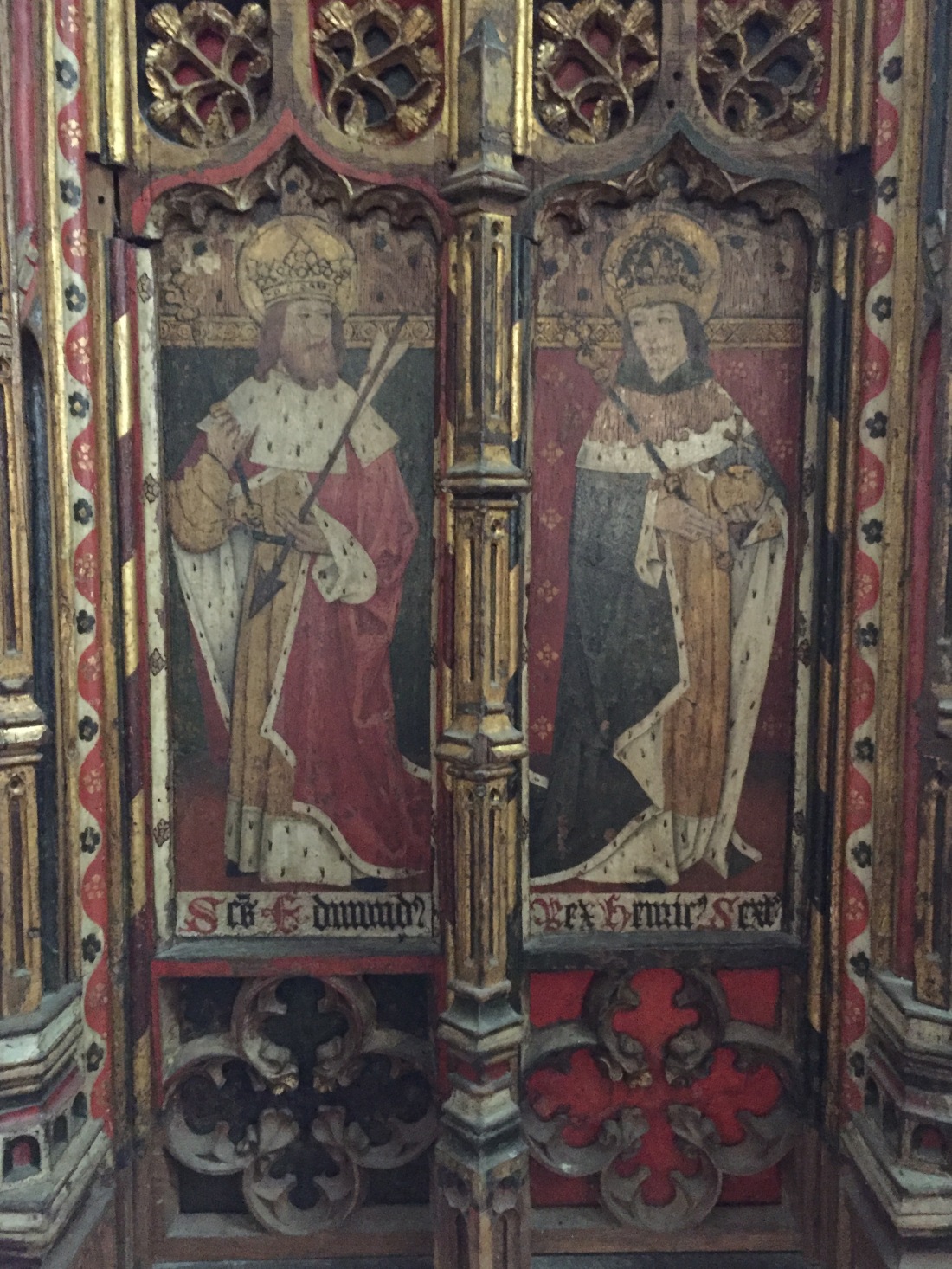 Day 1 Ludham to Norwich around 15 miles, walking from Ludham to St Benet’s, then crossing the river Bures by boat to South Walsham, following the walk from Ranworth to Norwich previously described after the walk last March. Evening meal at Norwich Cathedral 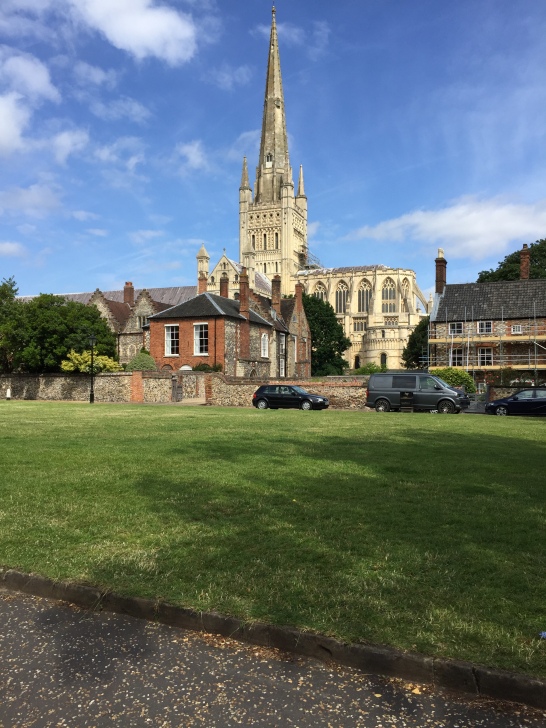 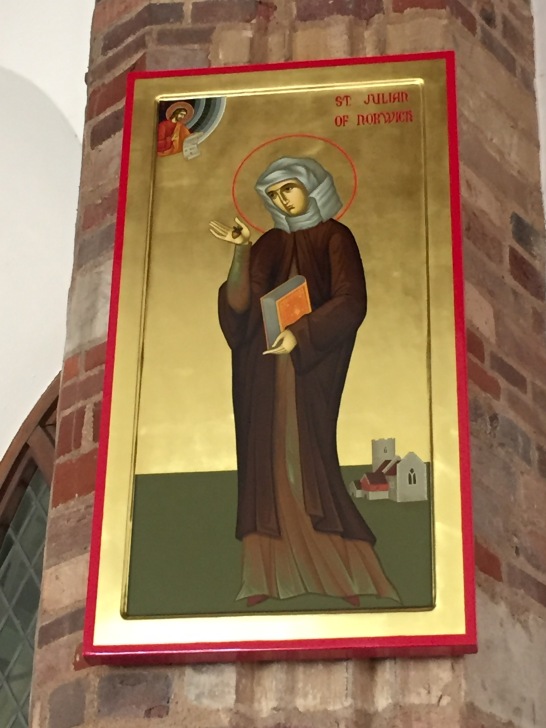 Day 2 Norwich to Dunstan around 12 miles. A walk of Medieval Norwich, devised by St Stephen’s Church in memory of Richard Caistor who died 600 years ago.  The walk includes the Shrine of Dame Julian for prayers, before setting out to Caistor . This is a Roman Fortification with plenty of wall left and a small church dedicated to St Edmund, which once belonged to the Abbey of St Edmund. Beyond this is a large hotel: Dunstan Hall, with comfortable rooms and decent food. I walked this way last June: the Medieval Norwich walk in particular was fascinating, and St Edmunds Church poignant: Bury men had been here before a long time ago. 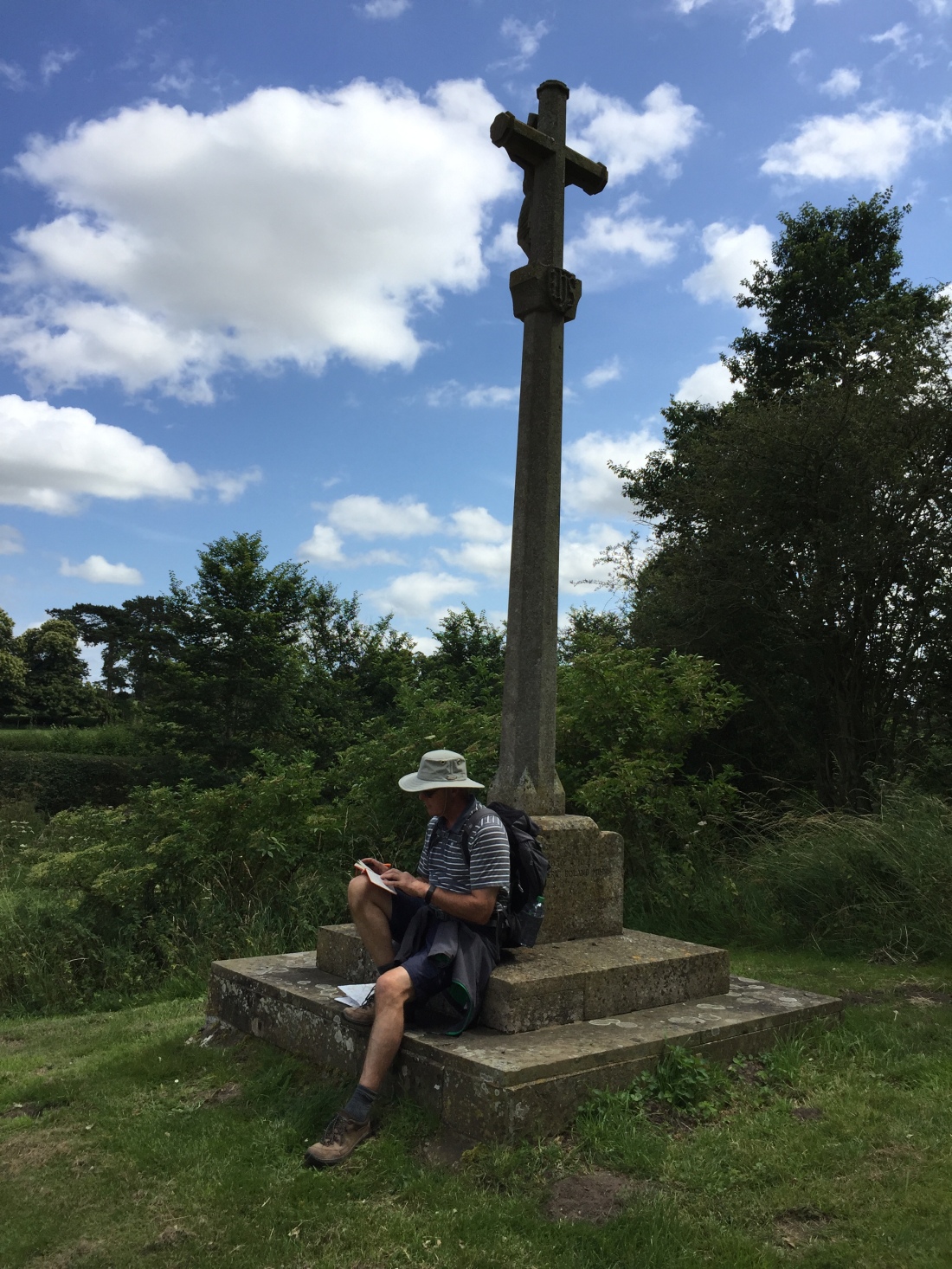 Day 3 Dunstan to Diss around 24 miles. Yes, twenty four miles. No proper hills and easy walking, but it takes a long time! We started at Dunstan Church just behind the hotel and basically walked Southwards along quiet roads and footpaths. Part of this includes the Boudicca Way, but where this seemed to zig-zag unnecessarily we ignored it, stopping for a picnic lunch by St Catherine’s church at Fritton, with lovely wall-paintings. Once past Fritton we stuck to the Boudicca Way all the way to Diss, which is well-signposted. 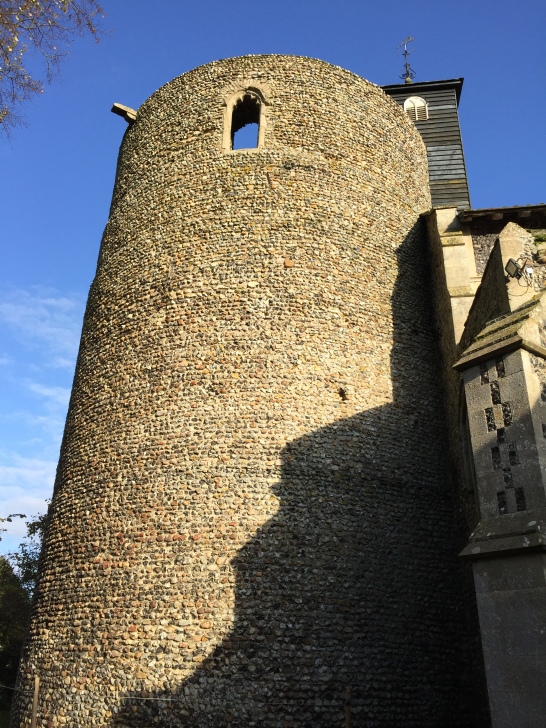 Day 4 Diss to Bardwell around 15 miles. I was always worried after very long walks whether I would ever be able to move again- but this will be easy! I trialed the walk with Ron West from Bury St Edmunds Ramblerslast October- the walk is straightforward along the Angles Way , then turning South-West at Thelnetham Church of St Nicholas 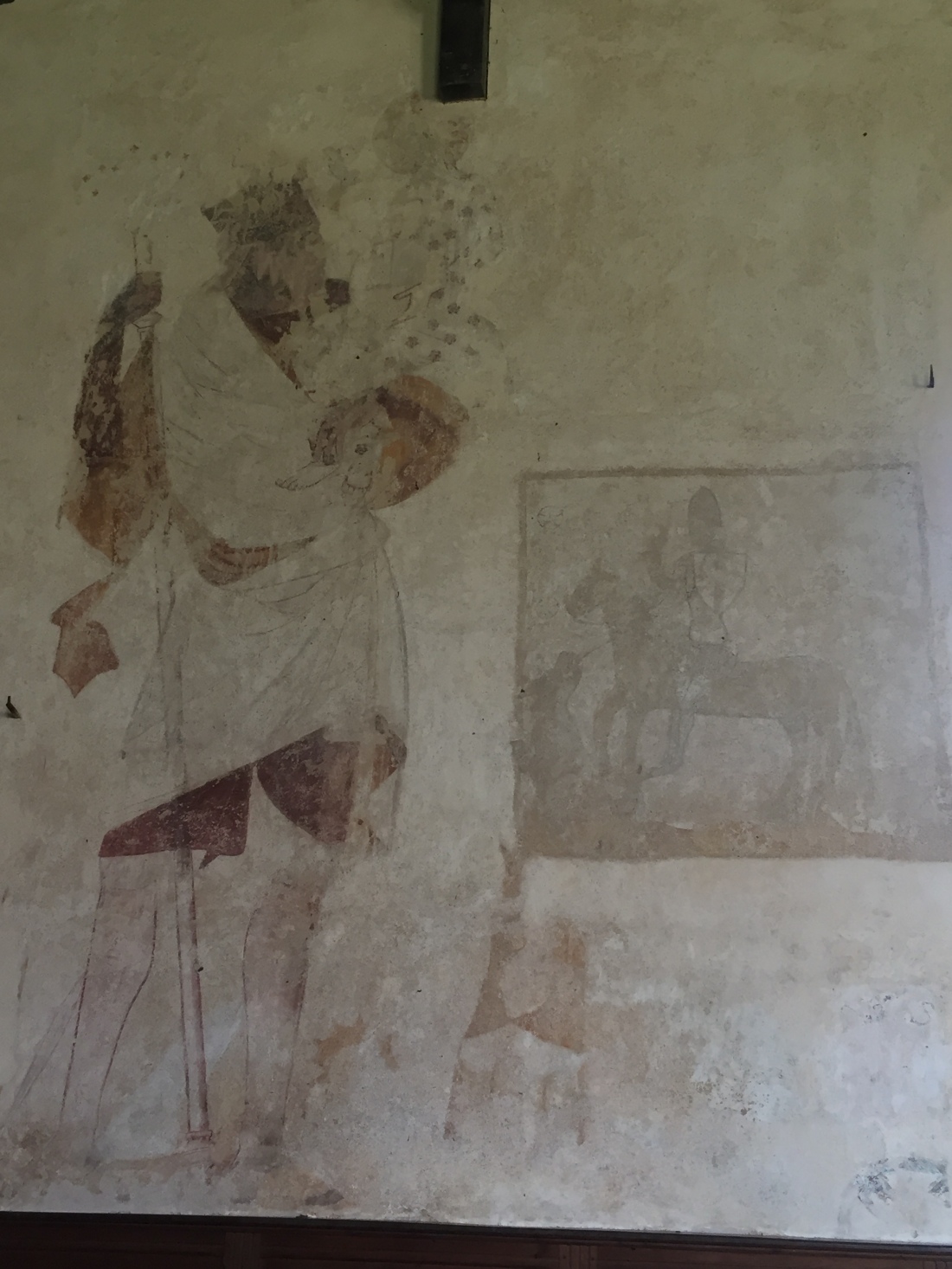 Day 5 Bardwell to Bury St Edmunds around 14 miles. The walk has been previously described on this blog via Troston, Great Livermere, Ampton and Ingham. The plan is to join the other pilgrims coming from Ely and arrive together in time for Evensong at 5.30pm at the Cathedral in Bury St Edmunds 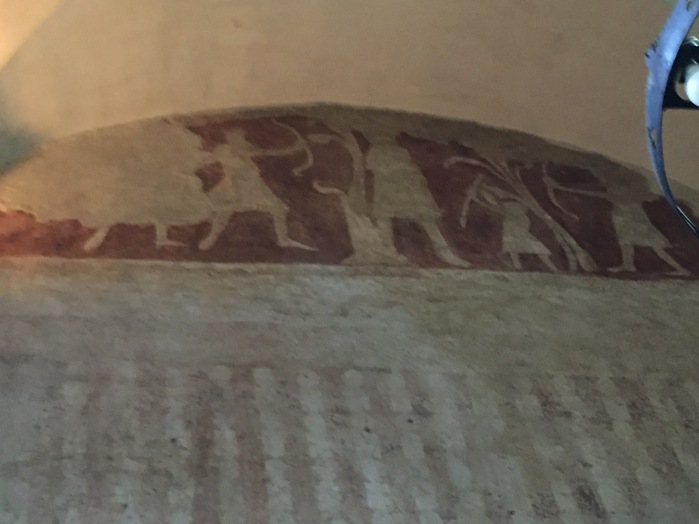 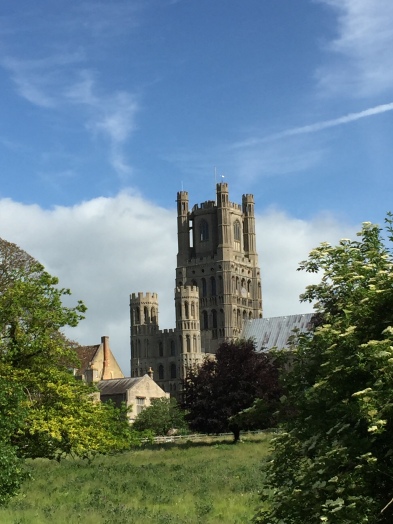 Day 1 Ely to Mildenhall. Around 15 miles Previously described on this blog: after a walk to Prickwillow the walk continues along the River Lark to St Mary’s, Mildenhall The Bell has kindly agreed to take on the hospitality with a pilgrim meal and beds. St Mary’s Church is celebrating their 800th Anniversary, so the Pilgrimage will be part of this. 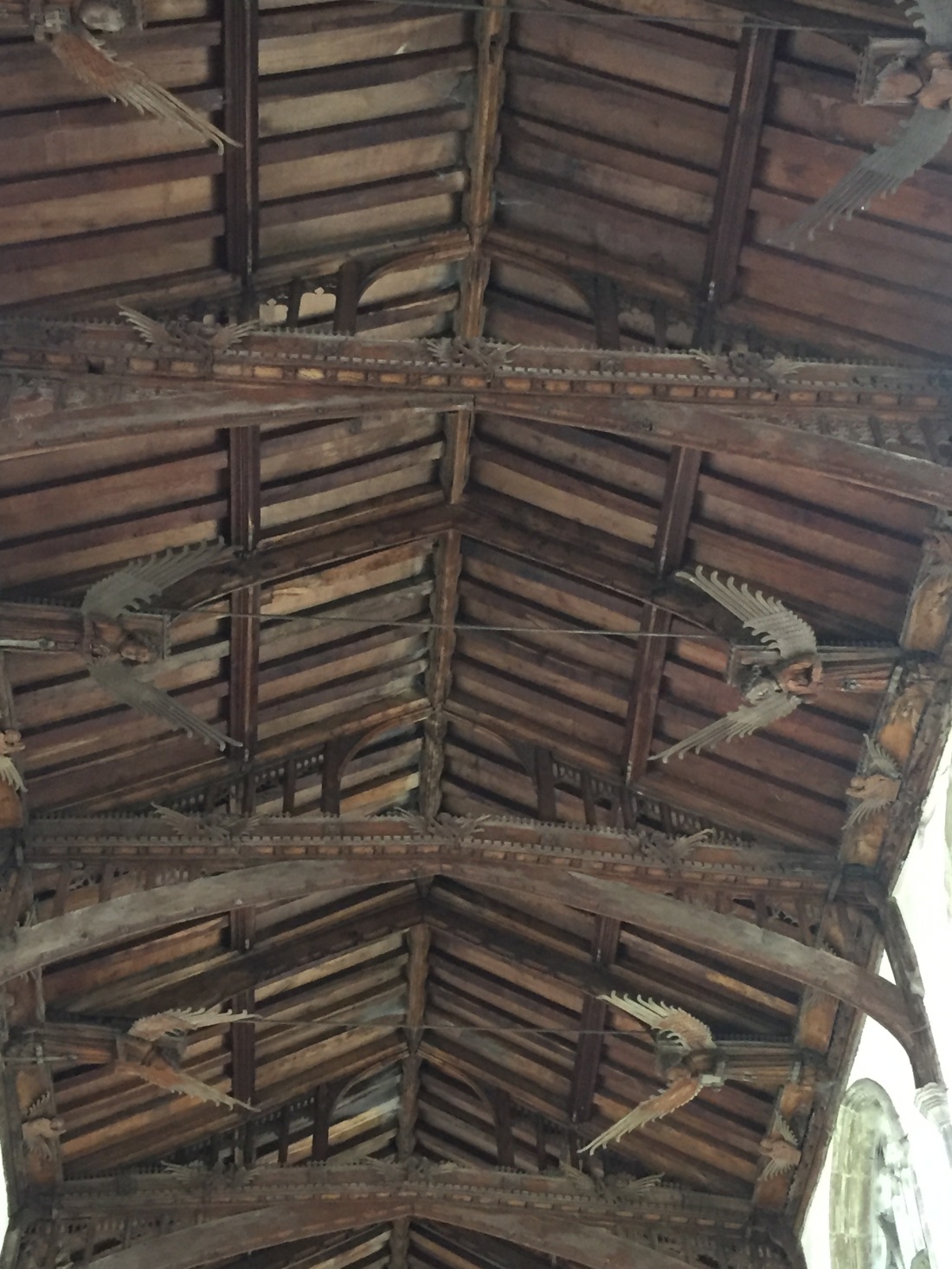 Day 2 Mildenhall to Bury St Edmunds Around 15 miles. Following the River Lark via Icklingham, then the Icknield Way to West Stow, and the River Lark again to Bury. Previously described on this blog.

I have two concerns for this walk: the A11, and undergrowth. I approached the Police about crossing the A11- their official advice is not to attempt it, but they do concede there is a public footpath marked and have suggested we use the new roundabout with traffic lights which control the traffic half-way across. The rest will involve timing in small groups

The undergrowth problem is less dangerous, but during the month of May things grow very quickly. There are offers of help to trial the walk beforehand armed with sickles.

And in the meantime I have been playing with more linocuts.  I was looking for images from 1020 and paid a visit to the museum at Norwich. I was struck by the subtle differences between early crosses and other, Viking images, and played with variations. I also played with Angels in Mildenhall for their 800th anniversary. 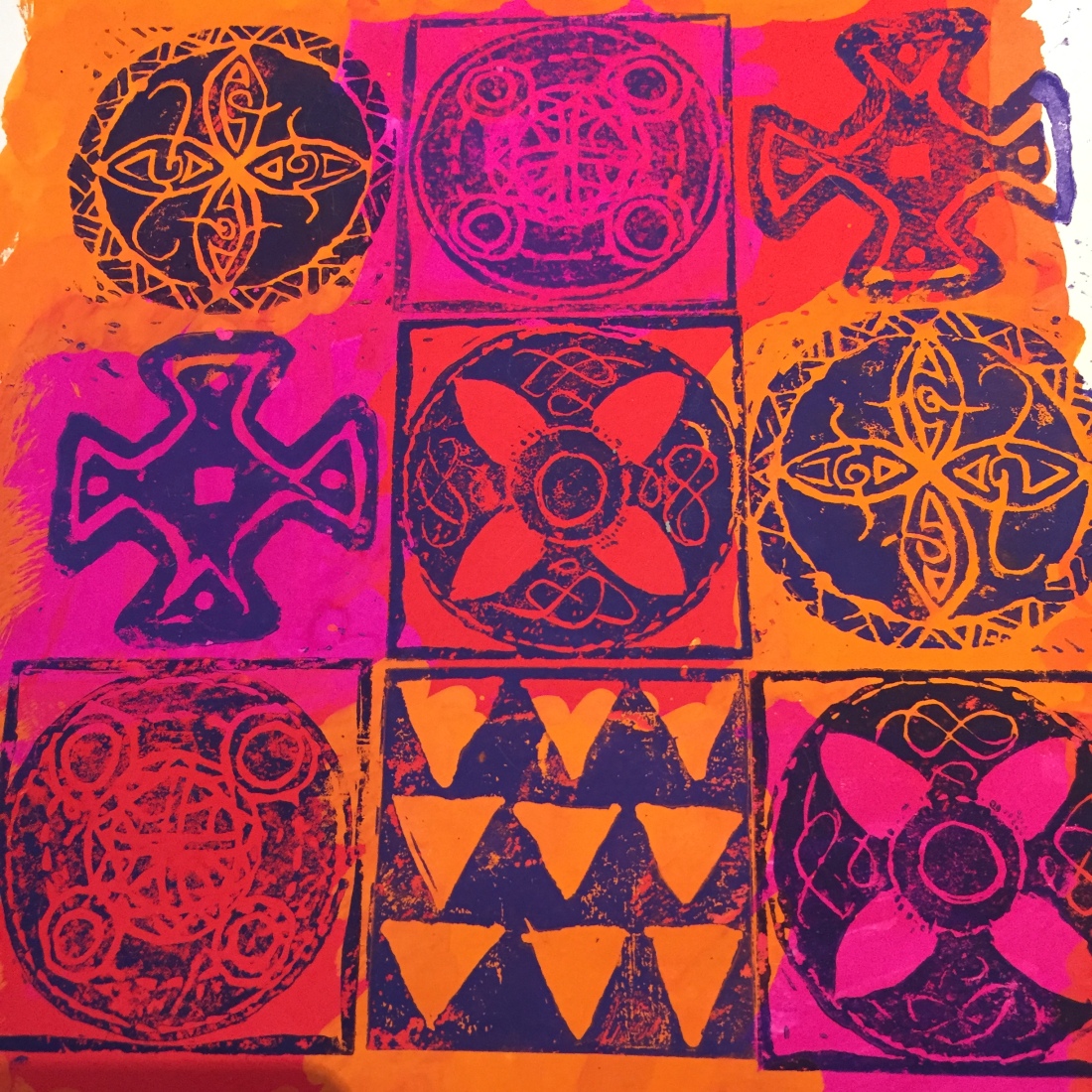 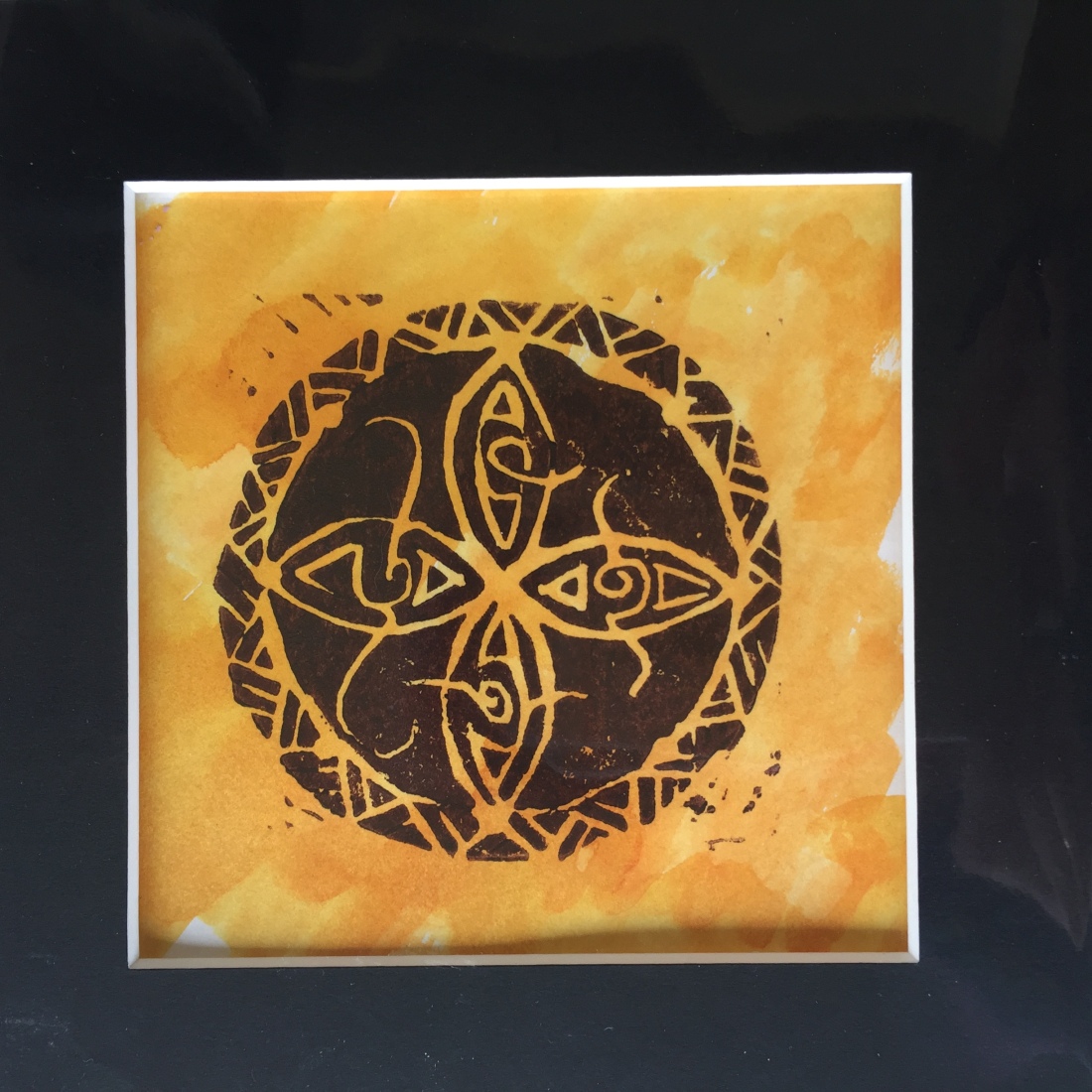 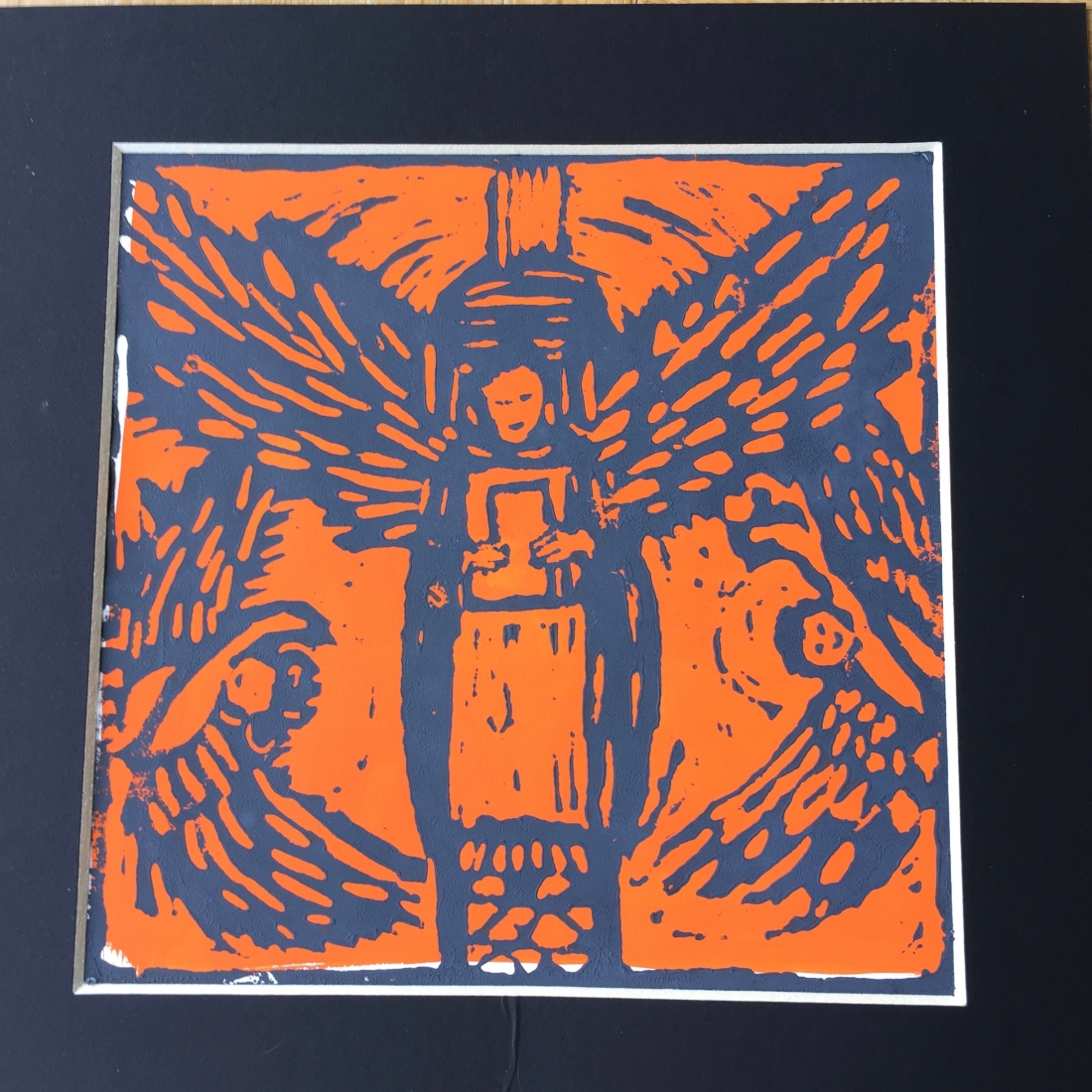 One thought on “Pilgrimage!”