I have walked back and forth from Mildenhall several times already: the path comes out of Bury S Edmunds on a footbridge over the A14, then along the river Lark. There is a detour from West Stow to Icklingham along the Icknield way.

Usually I go to see the angels in Mildehhall at St Mary’s church- so lively with their wings outstretched in the roof. The guide explains they are part of the structure of the church, as hammer beams, not just ornamental appendages. Most have remained intact, although an inspection in 1930 revealed 2 arrow heads buried in their bodies. Sadly the more accessible angels on the South side had their wings ripped off: in 1651 the parish paid a man a shilling a day to destroy them.

On this occasion my purpose was quite different. I have been growing woad on my allotment, and thanks to the hot summer have had a bumper harvest. Woad thrives on neglect and seeds everywhere on my sandy patch in Nowton Road. Having extracted the dye from the leaves I followed the Anglo-Saxon recipe of fermenting it with old urine. The moment when the wool is pulled out of the bottle is truly magical as the blue appears on re-oxidisation. 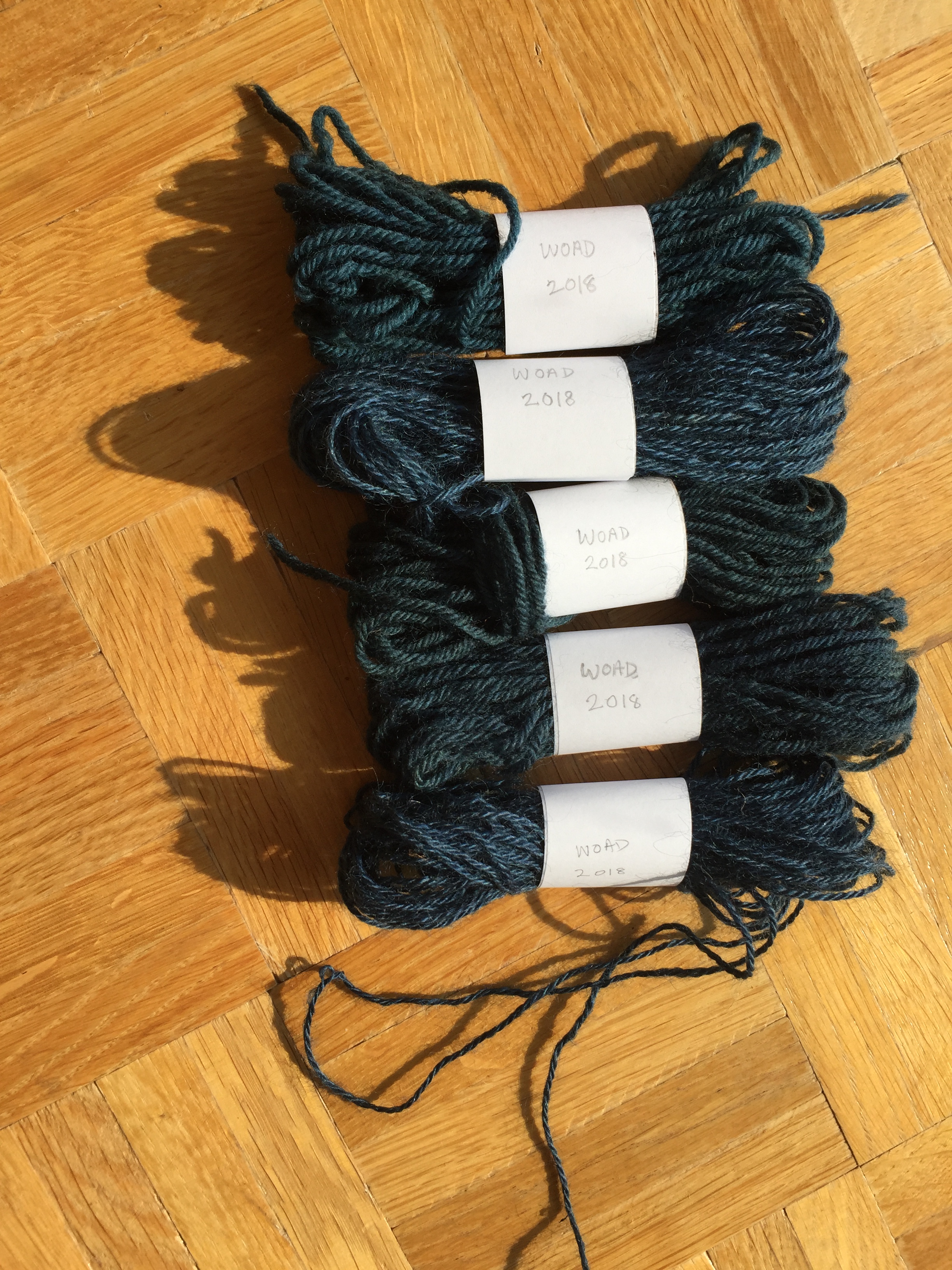 Woad used to be an East Anglian Industry until it was overwhelmed by cheaper imports of indigo. So what should I do with it? Such special material needed an art-project. So with this in mind I set off looking for ideas.

The end of summer was notable along the river, with silver tufts of willow-herb in the air. Much of the Lark was overgrown with rushes. I am told it used to be navigable, and was indeed the preferred route for pilgrims coming to Bury St Edmunds from Mildenhall. There were shots of magenta-coloured purple-loosestrife and other pink flowers I could not identify: a form of willow-herb?

Many of the plants I recognised as dye-plants from my favourite dye-book: “A Dyer’s Manual” by Jill Goodwin. Tansy, yarrow, bracken, dock, dandelion, bedstraw, sloes and elderberries: all these grow in abundance round here and are easily overlooked. The elderberries in particular were ripe for picking:

West Stow Anglo-Saxon Village uses experimental archaeology on an archaeological site to seek to understand life in the 5th-7th Century. It has two galleries displaying local artefacts- and a dye display using madder, weld and woad.  Fabric from that time is hard to come by, but I was struck by the bold and simple patterns imprinted on the pots, and also the many remnants of shields from that time. Why so many shields in times of peace? It seems that the men were buried with them, even if they were not warriors in life. Here were the ingredients for a rug/shield! The designs on the pots carried an immediacy, a boldness worthy of my woad harvest, and the repetition of pattern resonates with walking.

I bought a tiny book by local artist Kim Smith, illustrating the story of Beowulf using local pigments, and walked on full of ideas.

The Icknield Way turns off into land so different from the chalk clay South and West of Bury St Edmunds. Rows of Scots pine mark boundaries, their dark needles producing interesting shapes: 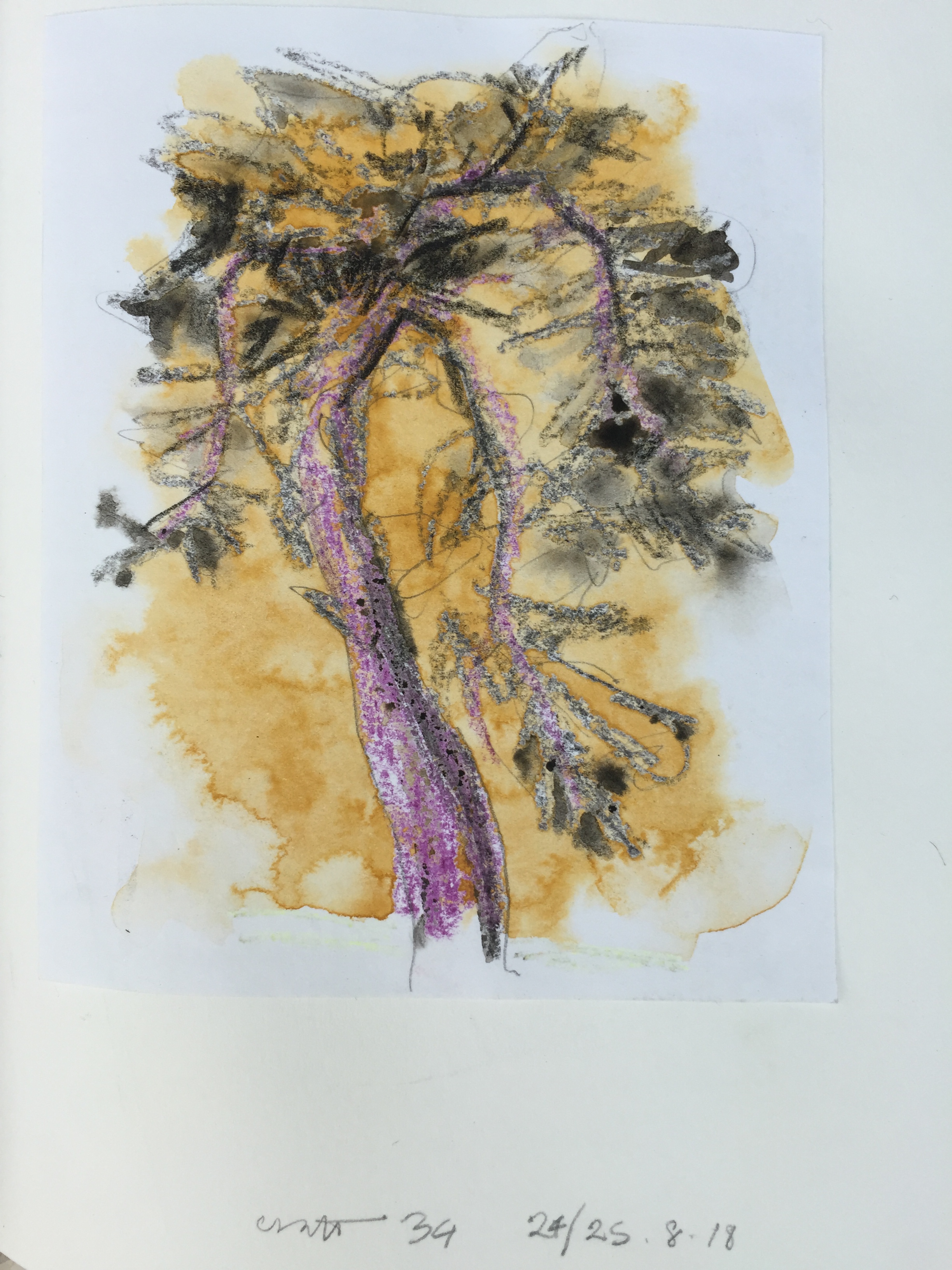 Breckland is recognised as special for its habitat and history, and The Breckland Society do fantastic work supporting it. Before reaching Icklingham there is a field full of flint-  I always think of the wonderful flint arrowheads and spear-heads at West Stow and Mildenhall museums. This time a harvest of onions is about ready.

The last few miles to Mildenhall are back by the river, and have become a bit of an assault course of nettles, a fallen willow branch and, worst of all, the A11. It was 4pm on a Friday before the Bank Holiday, and the traffic was solid, but still going fast. It took at least 20 minutes before I crossed the road, waving my arms about in the hope they would see me. I wonder if the council could be persuaded to put a foot-bridge there, too? I can try.

By the time I got into Mildenhall it was too late for their museum, but I had been there a few weeks ago and could remember the fabulous display of the warrior with horse and (of course) his shield.  Also the famous replica of the “Mildenhall Treasure”. But this was Roman, and not in the spirit of woad, which feels more like something Boudicca would enjoy. I will return there soon, but in the meantime will get on with the woad-work.